Meet the Experts yes to platinum

For the jewellery industry, a striking feature of the recession years has been the resilience of platinum. SARAH DEVERELL explains some of the science behind this top-end metal.

Platinum has been successfully marketed as the ultimate precious metal and has proved relatively resilient to recent fi nancial turmoil. Volume in the platinum market is very much driven by the bridal market and it has fared slightly better than gold and silver. Platinum is fi rmly established as the luxury option for wedding rings and although both 950 and 500 palladium have made some inroads into this market, the women’s wedding ring market has held up well; perhaps because not many suppliers have yet perfected the diff erent techniques required to make matching diamond set engagement rings in palladium.

With the price of gold topping that of platinum on several occasions during the 2011 to 2013 period, the price diff erence between 18ct gold and 950 platinum is smaller than it has ever been. Unlike palladium, where there has been a move towards a lower fi neness of 500 parts per thousand (ppt) creating a product to compete with 9ct white gold, platinum manufacturers have continued to push 950 platinum, consistently seeking the top end of the market.

257,000 platinum articles were hallmarked in the UK in 2013. This represents a 29% drop compared with 10 years ago in 2004. But with a massive 83% drop in gold volumes over the same period, it is clear that platinum has held up better. It continues to be the metal of choice for many wedding couples. Sarah Deverell, an Analytical Chemist, who spends her working day analysing samples to identify platinum levels from 950 ppt for hallmarking assays down to minute trace quantities in recycling samples, explains the technical properties which need to be considered when manufacturing jewellery from platinum, to make sure the rings will survive a lifetime’s wear. 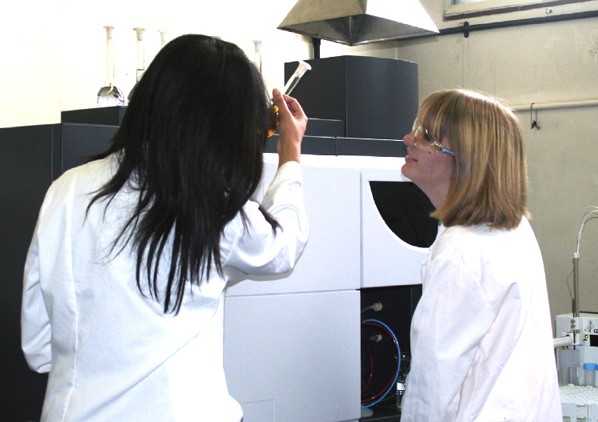 “Platinum’s continued popularity is driven by fashion trends but in addition to its high perceived value it also has some natural assets,” says Sarah. “The chemical composition and structure of platinum means that platinum alloys do not tarnish, which is a regular cause of customer dissatisfaction for other metals, most particularly silver.

The right alloy
“Platinum also has the benefit of being significantly whiter than white gold alloys. The accepted scientific way of measuring whiteness is against a Yellowness Index D1925 originally developed for the paint and plastics industry. On this index a 950 platinum and ruthenium alloy registers a low value of 8.811 compared with a premium white 18ct white gold alloy which is more likely to be around 17.378 on the index. Platinum therefore does not need plating to enhance it, so customer satisfaction issues with regard to plating wearing off to reveal a duller metal underneath do not apply.

“Platinum in its pure state is very soft and unsuitable for making jewellery, so platinum jewellery is usually made with a 950 standard alloy, i.e. 95 percent platinum and 5% other elements are in the alloy. The UK Hallmarking Act and the International Hallmarking Convention also recognises 999, 900 and 850 platinum but these are rarely used. The high fineness of the precious metal is a customer prerequisite for high quality gemstones. An initiative to introduce a new ISO standard for 600 quality platinum is in the offing. This standard is still under development but is being driven by the Swiss watch industry who are using new alloys which do not perform well with the current platinum standards. 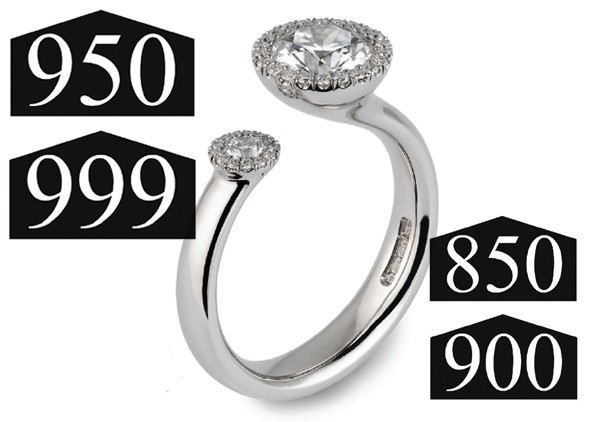 “The 50 parts per thousand of the alloys used in jewellery which are not platinum are therefore all important as they bring critical technical properties including hardness. iridium, rhodium and ruthenium raise the melting point and the hardness and may make the alloy appear whiter still. Cobalt lowers the alloy melting point, improves fluidity in casting and makes the alloy very slightly greyer.”

Sarah goes on to explain the technicalities in more detail. “Palladium lowers the melting point and reduces the density of the alloy. Palladium alloys particularly demonstrate why the apparently small 5% by weight can make such a difference. Platinum is nearly double the density of palladium at 21.4 gms per cubic centimetre. When the percentage by weight is converted to a percentage by volume it can be seen that the alloying elements have a disproportionate effect.

“Platinum (21.4) is nearly double the density of palladium (11.9) so on a volume basis the 5% by weight becomes close to 10% by volume. The 950 platinum and palladium alloy is therefore 90% platinum and 10% palladium by volume. Likewise, platinum 950/50 Cobalt would be approximately 87.5% platinum and 12.5% cobalt by volume. Ruthenium (12.45) also has a surprisingly larger presence on a volume basis. These ‘other’ metals can have a disproportionate eff ect on the alloy. Depending on what type of manufacturing method will be used, some alloys are more favourable than others.”

Platinum alloyed with 5% Ruthenium is the universal alloy of choice for many high-end manufacturers. Pt 950/Ru is 135 HV hard, has excellent colour, malleable and ductile. It is used for casting, fabricating, machining and die striking. Most of the machined wedding bands sold in the Europe are made from this alloy, and because of the hardness it will take on a very high lustre.

Assessing the quality
AnchorCert Analytical carries out independent quality assessments for many major companies if they find themselves in dispute with a customer. A variety of problems can arise. Experience has shown that if a consumer is complaining about a platinum ring deforming or scratching it is highly likely that the ring has been cast from an alloy of 95% platinum and 5% palladium, which has a hardness of only 80 and 70 (average) Vickers respectively.

Claws made in platinum are not susceptible to breaking through brittleness but will slowly wear out over time. Cobalt is a particular favourite for improving hardness and produces a good casting alloy. However, it is magnetic and customers do sometimes query the authenticity of their ring as they do not expect platinum to be magnetic!

In summary platinum alloys are stronger than white gold, but they are not harder. Hardness can be improved by using the correct alloy and platinum has the benefit of being suitable to re-polish to restore its lustre and remove any scratches or dents. Platinum seems set to be the favourite metal of many romantics for a while yet.

Sarah Deverell bsc is an analytical chemist. Trained in inorganic chemistry sarah is an experienced icP operator and analyses samples for platinum and many other elements on a daily basis. Platinum samples range from hallmarking reference assays with 95% platinum to recycled powders with only trace elements where accuracy is vital. other tests include plastics, paints and glass which have to be dissolved using a variety of high tech methods before being run through the sophisticated icP to identify elements such as lead and cadmium to ensure product compliance.