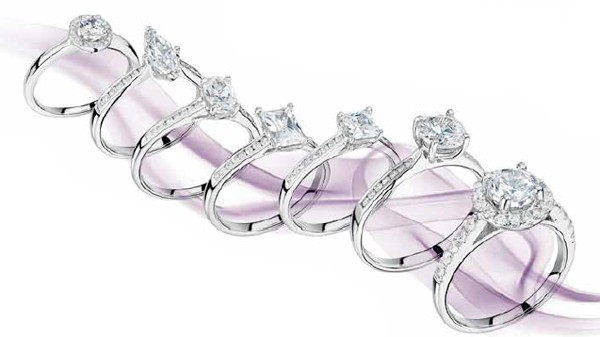 Dippal Manchanda, technical director at Assay Office Birmingham, is responsible for technical standards throughout the Assay Office. He manages the Laboratory on a daily basis and drives on-going research and development into innovative new services. In addition, Dippal applies his extensive experience and understanding of metal alloys to respond to specific problem items submitted to the Laboratory. A wide variety of samples hit Dippal’s desk, quite apart from the thousands of routine test and assays carried out by the Laboratory. Some of the most regularly recurring queries, usually about two per week, are related to consumer complaints regarding platinum rings.

Platinum remains the most popular choice for engagement and wedding rings. Nearly 240,000 articles were hallmarked in the UK last year, the majority being of 950 parts per thousand (ppt) fineness, meaning the alloy is 95 per cent pure platinum by weight. Platinum is commonly considered to be durable and ‘hard wearing’, mainly because it is not susceptible to tarnishing. It does not have to be plated, therefore avoiding long-term dissatisfaction due to plating wearing off. However, platinum in its pure state is very soft and unsuitable for making jewellery. The 50ppt of the alloy that are not platinum are therefore all important, as they add critical technical properties. Iridium, rhodium and ruthenium raise the melting point and the hardness and may make the alloy appear whiter still. Cobalt lowers the alloy melting point, improves fluidity in casting and makes the alloy very slightly greyer.

Palladium also lowers the melting point and reduces the density of the alloy. Palladium alloys particularly demonstrate why the apparently small five per cent by weight can make such a difference. When the percentage by weight is converted to a percentage by volume, it can be seen that the alloying elements have a disproportionate effect. Platinum (21.4 grams per cubic centimetre) is nearly double the density of palladium (11.9g/cm3), so on a volume basis the five per cent by weight becomes close to 10 per cent by volume. The 950 platinum and palladium alloy is therefore 90 per cent platinum and 10 per cent palladium by volume. Likewise, platinum 950/50 cobalt would be approximately 87.5 per cent platinum and 12.5 per cent cobalt by volume. Ruthenium (12.45g/cm3) also has a surprisingly larger presence on a volume basis. These ‘other’ metals can have a disproportionate effect on the alloy.

The rings that land on Dippal’s desk have almost invariably become dented, scratched or misshapen during the ‘normal’ course of wear, according to their owners, and Dippal’s task is to assess what has caused the issue. As with every article entering Assay Office Birmingham, the first step is a visual inspection by an expert. Dippal will look for dents, scratches, cracks and porosity in the metal and note any obvious signs of abuse. He will then subject the ring to examination using X-ray fluorescence analysis. This will identify the other elements present and give an accurate analysis of the composition of the alloy. The article is then tested for hardness and reported according to the universal Hardness Vickers (HV) scale. A ring with hardness below 120HV is unlikely to be fit for purpose. Dippal will also examine the item under a microscope before he draws his conclusions. This is not always straightforward as the method of manufacture also affects the hardness of the finished article and the suitability of the alloy used.

Depending on the manufacturing method, some alloys are more favourable than others. Platinum alloyed with five per cent ruthenium is the preferred alloy for many high-end manufacturers. Platinum 950/50 ruthenium is 135HV hard, has an excellent white colour and is malleable and ductile – important properties during manufacture. It is frequently used for casting, fabricating, machining and die striking, and most of the machined wedding bands sold in Europe are made from this alloy. Due to the hardness, it will take on a very high lustre.

For hand fabrication, platinum 950/50 iridium is a good choice, as the metal is work-hardened by hammering and rolling it. For casting, platinum 900/100 iridium is potentially very suitable, as platinum 950/50 iridium may be too soft, but this would be hallmarked as 900 platinum. The majority of complaints that Dippal sees with regard to platinum alloys concern rings that have been cast from platinum 950/50 iridium or platinum 950/50 palladium, which have a hardness of only 80 and 65 (average) Vickers respectively. When rings are made by casting, the finished product needs little additional work – usually just cleaning and polishing; processes which do not add to the hardness of the alloy. It is therefore important that an appropriate alloy such as platinum 950/50 cobalt or platinum 950/50 ruthenium (both of which have a hardness of 135HV) is used. If a ring is to be die struck or hand finished, a softer alloy may be appropriate as some of the manufacturing procedures undertaken will harden the item. In this case the five per cent could be palladium or iridium and still deliver a satisfactory piece. The chart below highlights which alloy is best suited to which application: 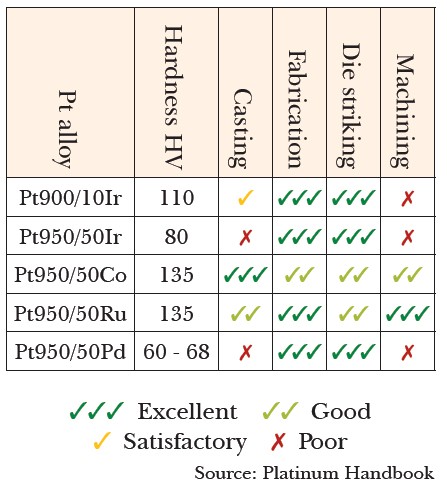 In the UK there has been a legal requirement to hallmark platinum since 1 January 1975 and over three million platinum articles have been marked by the four UK assay offices. From 1975 until 1 January 1999, the only officially recognised standard of purity or ‘fineness’ in Britain was 950 parts per thousand (ppt). Since 1999 there are four recognised standards, which are: 850, 900, 950, and 999 ppt, but still over 99.5 per cent of hallmarked articles are 950.

Dippal Manchanda is the chief assayer and technical director at Assay Office Birmingham, responsible for maintaining high analytical standards and providing scientific and technical expertise to all divisions of the business. Dippal holds a Masters degree (MSc) in inorganic chemistry and has over 20 years of experience in assaying and the examination of precious metals and alloys. He is also a Fellow of the Royal Society of Chemistry and has attained the level of membership of ‘Chartered Chemist’. The UK Science Council has awarded him the status of ‘Chartered Scientist’ – a recognition awarded to those scientists who demonstrate the application to stay up to date in their field. During his varied career, Dippal has been involved in several prestigious precious metal projects including setting up a state-of-the-art gold/silver medallion manufacturing facility for a public sector undertaking in India.